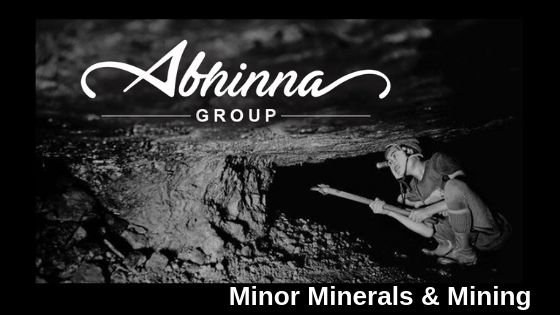 Here’s a write-up on the mineral resources of India – minor and major. Minor minerals in west Bengal are a big contributor to the economy…
of the state.

Here we get to know about the mineral presence of India on the basis of being Minor mineral or Major mineral.

What are Minor minerals ?

* Minor minerals are those which are prescribed by Mines and Minerals (Development and Regulation) Act, 1957 ( section 3(e) ) as being categorized as ‘minor minerals’. This includes stones for building, ordinary clay, ordinary sand and any mineral which by the notification of the Central Government may declare to be a minor mineral. Under this Act however, ‘minerals’ include all minerals other than mineral oils, petroleum and natural gas. In addition to those specified under MMDR Act, here are a list of few minerals that the Central Government has declared as minor minerals: boulder, shingle ,chalcedony pebbles used for ball mill purposes only, lime shell, kankar and limestone used in kilns for manufacture of lime used as building material, brick-earth, fuller’s earth, bentonite, road metal, slate, marble, stone used for making household utensils, quartzite and sandstone (when used for purposes of building or for making road meta)l , saltpeter and ordinary earth (used or filling or leveling purposes in construction or embankments, roads, railways, building).

What are Major minerals ?

Major minerals are those specified in the the Mines and Minerals (Development and Regulation) Act, 1957 (MMDR Act 1957) . Some of the major minerals include Lignite, Uranium, Coal, Gold, Iron ore, etc. And it is to be taken that whatever is not declared to be a minor mineral is a major mineral.

Are these classifications dependent on the quantity of their availability ?

The classification of minerals as major or minor has nothing to do with the availability of these minerals.

However the classification can be said to be in terms of :

For example, Limestone or sand can be classified as a major mineral or a minor mineral depending on their use.

What is the mineral availability in India ?

India is richly blessed with about 88 varieties of minerals. These include 4 Fuel Minerals, 3 Atomic Minerals, 26 Metallic and Non-Metallic Minerals and 55 Minor Minerals.

What power does the government has with regard to minerals ?